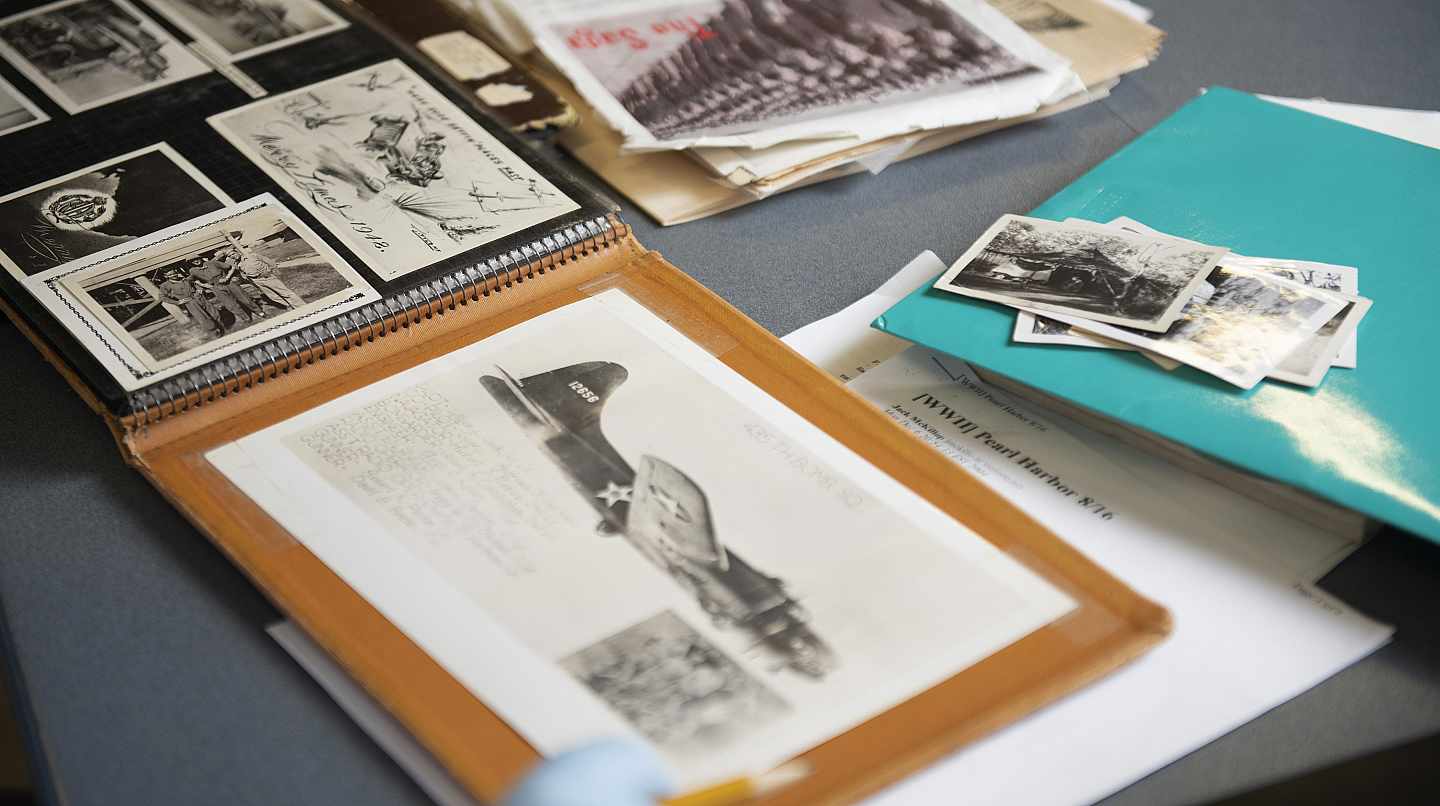 The National Museum of the Pacific War has been accepting items for inclusion in its archives for more than fifty years. We actively seek material related to all branches of service and provide access to all of the material in our collection. The following are highlights from the collection.

Photographs, letters, diaries, service records and other papers from individual service members. This particular collection is related to more than 220 veterans who served in the U.S. Army or Army Air Corps / Army Air Force and their constituent parts. Not all units are covered, but many are.

Photographs, letters, diaries, service records and other papers from individual service members. This particular collection is related to more than 112 veterans who served in the U.S. Marine Corps. Not all units are covered, but many are.

Photographs, letters, diaries, service records and other papers from individual service members. This particular collection is related to more than 532 veterans who served in the U.S. Navy, Coast Guard or Merchant Marine. Not all ships and land units are covered, but many are.

During the Pacific War, efforts made by U.S. Navy cryptanalysts at Station Hypo (Pearl Harbor), Station Cast (Melbourne, Australia), and Station Negat (Washington, D.C.) significantly helped determine the outcome of the war. This collection consists of copies of reports and copies of radio traffic related to the activities of each of those stations and several other units tasked with intercepting and decoding Japanese radio traffic before and during the war. This material was donated by the U.S. Naval Cryptologic Veterans Association and included with it are transcribed interviews with cryptologists and issues of the association’s “Cryptolog” newsletter.

One of the most valuable aspects of this archives are the range of female voices it preserves. The primary representation of women in the NMPW archives comes from those who served in each branch of armed forces; the American Red Cross (A.R.C.), and the United Service Organization (U.S.O). Some highlights include the photo album and service records of Jane C. Kendeigh, first Navy flight nurse that landed at Iwo Jima to help evacuate the wounded; photos and letters related to Col. Oveta Culp Hobby, director of the W.A.A.C. / W.A.C.; photos and scrapbooks from U.S.O. entertainer Betsey Berkeley; an extensive collection of photos, letters and scrapbooks from W.A.V.E. recruiter Mable Morrison Alley and numerous collections of letters, photos, newsletters, scrapbooks, and training material related to several dozen women who served as nurses and A.R.C. workers throughout the Central and South West Pacific and in post-war Japan.

PT boats played an important role engaging enemy transports, tankers, barges, and warships during the war and were also used as gunboats against inter-island transports and armored barges. The NMPW has one of the few surviving boats of this kind, a Higgins example, PT-309, that saw service in the Mediterranean Theater of the war. As a consequence, the museum has received several small collections of photos and documents related to PT-309 and multiple small donations of photos and documents related to the use of PT boats in the Pacific Theater.

Items that help document the P.O.W. and internee experience is a strength of this archives. Highlights from this collection are the personal diary kept by Maj. Gen. Edward P. King, who surrendered the troops on Bataan; a diary and scrapbooks kept by Col. Nicoll Galbraith; artwork created by prisoner Frank Fujita, letters and photos related to ‘Angel of Bataan’ 1st Lt. Edith Shaklette plus postcards, photos, letters and memoirs related to several dozen additional P.O.W.s. The archives also contain 20 linear feet of material that came to the museum from Andrew Miller of the American Defenders of Bataan and Corregidor, and 2 linear feet of notes, photos and documents donated by historian and former P.O.W. Robert Martindale, who wrote The 13th Mission: Prisoner of the Notorious Omori Prison in Tokyo.

Material in the archives related to internees in the Philippines provides a variety of material for those interested in researching that topic. Some highlights are the photos, letters and documents related to Medal of Freedom awardee Nancy Belle Norton; papers and photos of the Carolyn F. Brush family; documents, photos, drawings and newsletters related to the Walter and Agnes Schoening family, and the documents, photos, and diary from Gloria Fay Korenblit. This collection also contains numerous privately published books and memoirs related to many of the women, children, and men who were interned at Santo Tomas, Los Banos, Baguio and other Philippine camps.

The majority of items in this collection were generously donated to the museum by members of the Nimitz family. The remainder came to museum from close associates of Adm. Nimitz and numerous individuals from all walks of life that encountered him. The collection contains hundreds of personal photographs, taken by and of the Nimitz family, that are dated from the 1840’s to 1966 as well as hundreds of official photos dated 1905 to 1972. This collection also contains various papers, personal letters and scrapbooks related to the early life and pre- and post-W.W. II life of Chester W. Nimitz.

After receiving his commission, Capt. Roger Pineau was trained at the Navy Japanese Language School at Boulder, Colorado and worked in cryptanalysis during W.W. II. After the war he was assigned Adm. Samuel E. Morison’s staff and played a vital role in the creation of Morison’s writings about the history of the Pacific War. Much of the material in this collection concerns Pineau’s work with Morison and his own work as a Pacific War historian in later years and consists of correspondence, manuscripts, photographs and books related to his research and writing.

The James D. Hornfischer Collection consists of research, correspondence, notes, interview recordings, rough drafts and other material associated with James D. Hornfischer’s writing career. The focus of this collection is on his critically acclaimed historical works related to the Pacific War titled The Last Stand of the Tin Can Sailors (2004), Ship of Ghosts (2006), Neptune’s Inferno (2011), and The Fleet at Flood Tide (2016).

The Robert C. Mikesh Japanese Aviation Collection consists of drawings, photographs, photograph negatives, periodical articles (Japanese and English), correspondence, analyses, assessments, and color samples. These materials were accumulated by Mikesh, a former director of the National Air and Space Museum, from 1944 to the early 2000s.

This collection contains materials related to members of the 1st American Volunteer Group (1941-1942), also known as the Flying Tigers. Included are copies of diaries, biographical data and photographs made by and of members of the AVG, as well as research files and audiovisual materials compiled by the AVG Association historian and other scholars.

Items in the U.S.S. LCI National Association Collection came to the NMPW from the historian of that organization, Dennis Blocker. In 2007, Mr. Blocker, who had thoroughly researched his grandfather’s wartime experience on LCI (G) 449, was asked to be the historian for the association. Begun at his home in San Antonio, Texas the collection grew immensely during the next several years. During 2013, it was determined that this collection would be better preserved and made available to researchers at the NMPW. It consists of documents, photographs, correspondence, memoirs and other writings related to nearly all LCIs produced during W.W. II.

Comparable in size to Landing Ship, Tank and the Landing Craft, Infantry, there were 558 Landing Ship Mediums constructed for use by the U.S. Navy during World War II. This collection consists of ship histories, ship logbooks, photographs, anecdotes, audiovisual recordings, digital files and other material accumulated by the historian of the LSM / LSM(R) Association. Almost all LSMs and LSM(R)s are covered.

Our collection of Rare Books consists of publications made by and for each branch of the U.S. military during the war; wartime Federal Government publications, and books that are rare or unusual. Many training manuals and guides are in this collection but there are also unit histories, training class yearbooks, cruise books, and many post-war books published by veteran’s organizations.

Please direct questions or interest in these collections to the Director of Archives and Library at cmcdougal@nimitzfoundation.org or 830-997-8600 (ext. 264)