Children's Exhibit Coming in Spring of 2023 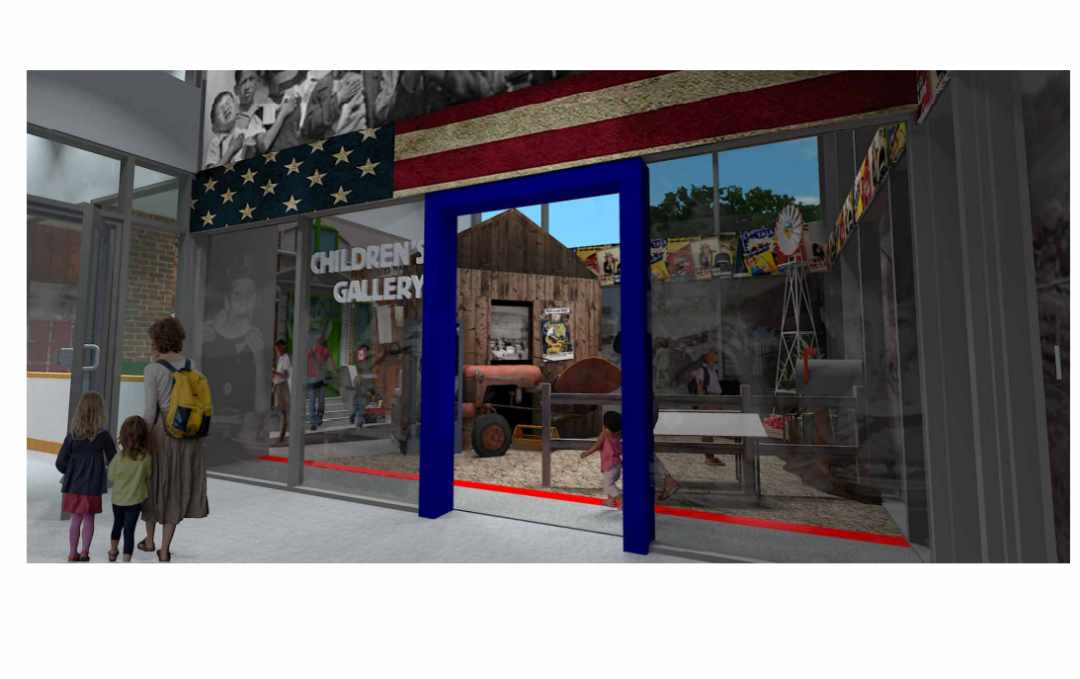 The Museum will open a Children's Exhibit that will depict World War II on the home front in the United States through the eyes of children. The new exhibit area will be located near the east entrance of the gallery adjacent to the Plaza of the Presidents. Visitors will have opportunities to ponder not only the sacrifices made by children on the home front during the war but also their resilience. The early stages of construction have begun and the gallery is set to open in February 2023. This exhibit is the first phase of a major renovation of the George H.W. Bush Gallery.

Featuring three vignettes - a rural scene, a city scene, and one of an internment camp- visitors get a glimpse of growing up under the cloud of war and a variety of interactive opportunities. The vignettes vary from a cotton farm in Texas to a street in south Chicago, to an internment camp in Wyoming for Japanese Americans. Within each setting, visitors will get a sense of what American children faced on the home front by encountering a virtual child, which will serve as an introduction to that space.

On the farm, visitors meet Thomas, a 12-year-old boy, helping his parents. Thomas’ older brother is fighting overseas with the Marines and his sister has left the farm to build airplanes in the defense industry in Fort Worth. Visitors to the farm venue get a sense of Thomas’ routine on the farm, the sacrifices he has made in donating his dog to the Army, and the sense of loss he has experienced in having his siblings far from home. Also, visitors learn about the various crops raised in America necessary for the war effort.

Next, visitors are introduced to Walt, a 14-year-old black boy growing up in the Bronzeville neighborhood of Chicago. His parents have relocated from Alabama and his older brother is in the Army. Visitors in this space encounter interactives introducing them to the concept of food rationing. There is also a newsstand in the space designed to illustrate the amount of information available to people in urban settings. A radio playing period programming is also heard from the window of a townhome in this space. Visitors also have the opportunity to play video games involving plane spotting and collecting material for a scrap drive, activities in which children engaged during that era.

Many Americans of Japanese descent were forcibly relocated to internment camps during the war and the third vignette, set in a barracks, examines that experience through the eyes of Mary, a 12-year-old girl from Los Angeles whose family was removed to the Heart Mountain Relocation Center in Wyoming. Within this space visitors encounter a digital interactive designed to elicit critical thinking about what items they would take should they find themselves in Mary’s circumstances. Other digital interactives introduce visitors to various activities many young Japanese internees may have enjoyed while interned: receiving instruction about the Japanese language, playing musical instruments, and fashioning garments from scraps. Also in this space, visitors are challenged with various questions to ponder about what they would do under circumstances faced by Japanese Americans on the home front during the war.