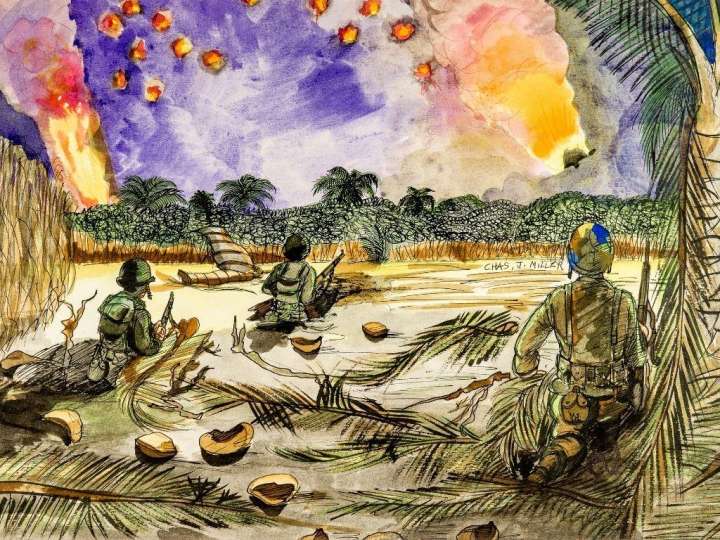 This Event Has Already Passed

This exhibition features the extraordinary and nearly forgotten paintings of World War II soldier/artist and New Hampshire native, Charles Miller. This exhibition is curated by The Wright Museum of WWII in Wolfeboro NH. This show presents paintings and drawings produced by Miller during his deployment in the Pacific Theater of WWII. This exhibition is made possible in part by The Art Place, Wolfeboro, NH; Mr. and Mrs. James Clemons; and the Family of Cpt. Donald M Jones, Navy AF, 1942-45.

We are honored to present an exhibition of the extraordinary and nearly forgotten paintings of World War II soldier/artist and New Hampshire native, Charles Miller. Curated by The Wright Museum of WWII in Wolfeboro NH, this show presents paintings and drawings produced by Miller during his deployment in the Pacific Theater of WWII. The vivid images bear witness to the everyday life of the servicemen who fought in the South Pacific Theater during World War II created by an untrained draftsman and painter with a remarkable natural talent. They present a unique first-person perspective that is more personal and direct than even much of the photojournalism from the era, offering an emotional account of one man’s experience of the war.

Charles Joseph Miller (1906-1994) was born to first-generation immigrants who worked in Nashua’s cotton mills. His father, Bernard Joseph Badaris and his mother Marcella could neither read nor write English. Charles’s nephew, who lives in Manchester, N.H., says that Charlie was given the name Miller so that he would not have a “foreign-sounding name”. Charlie’s talent for drawing was evident even as a young child but he was discouraged from pursuing his artistry. Rather, with our Nation in the midst of the Great Depression, Charlie was required to quit school after just the sixth grade to join his parents working in the mills to help support the family.

It was tough work for a young boy but as Charlie’s sister Anna remembered, at the end of a long day he would go alone into the attic where he would secretly draw and paint. Never receiving any formal artistic training, it was in the attic that he honed his skills; surviving the drudgery of mill life by creating his own rich and vibrant artistic world.

In 1925, at the age of nineteen, Charlie enlisted in the Army and remained in the service until 1935 when he returned to Nashua. In early 1942 at the start of World War II, Charlie was called again to serve, drafted, and stationed primarily in the South Pacific until October 1945. It was during his WW II years that Charlie drew and painted scenes of the everyday life of the servicemen around him, often including himself as part of the action. The resulting pictures are powerful works of art --
full of wonderful color and skilled craftsmanship with dramatic action and keen observation.

Charlie also included written descriptions on the front and back of each painting creating unique 70-year old historical documents of the wartime scenes he witnessed.

Charlie never considered himself a “real” artist but “just a guy with a hobby.” He never sold any of his war paintings, but frequently gave away works to servicemen who showed an appreciation for his art. Charlie estimated he created over seven hundred South Pacific paintings and said of the descriptive scenes, “You see what I saw.”

After the war, Charlie resumed a quiet life in Nashua. He never married and contentedly worked in a series of custodian jobs. He carefully preserved his artwork but never exhibited his World War II renderings until 1987, when his sister Anna convinced the Currier Art Museum to show twenty-one of the paintings. We are grateful to the Miller family for preserving these historic and artistic treasures and allowing The Wright to exhibit over eighty of Charlie’s works, most for the very first time.

“The World War II Art of Private Charles J. Miller” provides a rare opportunity to witness what daily life felt like for soldiers in the South Pacific over seven decades ago, and to finally thank Charles Miller - a humble son of the Granite State - for creating this important body of art. Please join us at The National Museum of the Pacific War to view these seldom-seen images that combine art, war and history in an unforgettable fashion.

This exhibition is made possible in part by The Art Place, Wolfeboro, NH;

The World War II art of Private Charles J. Miller has been organized by the Wright Museum of WWII, Wolfeboro, NH. All Miller works are from the Robert and Nancy Dennis Collection.