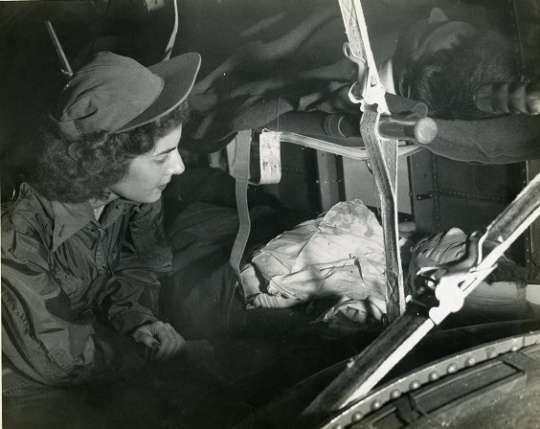 During the fight for Iwo Jima in March 1945 and Okinawa, the following May, a 22-year old ensign, Jane Louise ‘Candy’ Kendeigh, became the first Navy flight nurse to arrive at those islands to care for the wounded. Kendeigh was one of 122 women selected to receive specialized training in 1944 that taught them to not only recognize and treat battlefield wounds, but fight in hand-to-hand combat if needed and make preparations in case their aircraft needed to ditch in the ocean.

Upon graduating from the program in early 1945, most of the 48 nurses that successfully completed the program were assigned to a Naval Air Transport Service medical evacuation squadron, VRE-1. This squadron deployed to Guam in anticipation of the Iwo Jima campaign and would play an important role there by successfully evacuating 2,293 servicemen at Iwo not long after they were injured and repeating that feat at Okinawa. The first flight that Ensign Kendeigh made to Iwo Jima was documented by a member of CDR

Edward Steichen’s Naval Aviation Photographic Unit, Lt. (jg) Gill DeWitt. Lt. DeWitt took many photos during each stage of the journey and later, to document the experience, he put the photos into a scrapbook and made handwritten commentary next to many of them. Jane L. Kendeigh Cheverton passed away in 1987, eight years after Gill DeWitt. The scrapbook that he assembled to document the experience they shared on that flight to and from Iwo Jima was donated to the archives at the National Museum of the Pacific War. Not long afterward, this remarkable document was photographed and turned into booklet, published and sold by the Admiral Nimitz Foundation.

Thanks to Jane and Gill, along with the National Museum of the Pacific War, the vital work that Navy flight nurses accomplished will never be forgotten.

He Lied to Serve His Country: The Story of Navajo Code Talker Carl Gorman

FROM THE ATLANTIC TO THE PACIFIC: THE ORAL HISTORY OF ROBERT L. HAGEE

Holding Down the Homefront : The Oral History of Jessie Clark