Webinar: Fitting the Means at Hand to the Problem 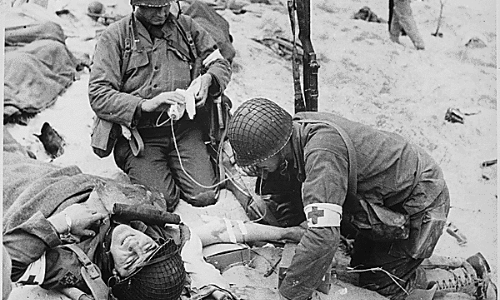 During World War II, Army medical units--like their counterparts at the frontline-- needed to adapt their tactics and maximize available resources to move wounded, injured, and diseased troops through dense tropical jungles, during heavy rains, and in many instances under enemy fire.

Fitting the Means at Hand to the Problem examines four major campaigns in the Pacific Theater: Guadalcanal (1942-1943); Papua, New Guinea (1942-1943); the Aleutian Campaign (1943); and the Philippine Campaign (1944-1945) and illustrates how the medical evacuation process evolved by reviewing contemporary doctrine, the challenges created by unpreparedness, and the utilization of available (including joint) resources.

Join Shane P. Reilly for a discussion about these changes to medical evacuation and treatment which resulted in improved procedures during subsequent operations. Learn how many of these lessons are still relevant to the modern force.

Mr. Reilly is a native of Morrisville, Pennsylvania and holds a Bachelor of the Arts degree in History from Temple University and a Master of the Arts degree in Applied History from Shippensburg University. He wrote a number of unpublished, specialized studies for senior civilian and uniformed Army audiences. These include "Nothing Happens until Something Moves": Army Movement Control, 1945-Present and History of the Modern Army Secretariat. He is a lieutenant colonel in the Army Reserve, serving in the Logistics Corps. He resides in Carlisle with his wife, Linda and two children, Charlotte and Alexander.