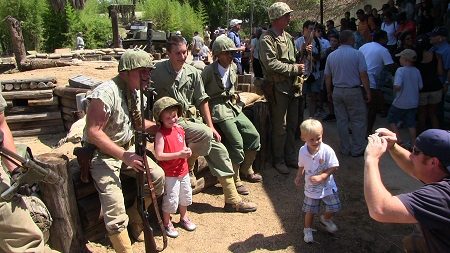 No one embodies the picture of a battle-hardened WW II USMC grunt better than does Bill Sultenfuss. “Wild Bill,” as he is known, has been educating and entertaining audiences at reenactments in the Pacific Combat Zone at the National Museum of the Pacific War for more than 20 years. I spoke with Lt. Col. Sultenfuss about his duties as a reenactor and what it’s like to share the history of the Pacific War with so many people.

You’ve been a reenactor since 1998. How did you first come to be involved in the Pacific Combat Zone?

I have reenacted since 1982 in Virginia and California. When I returned to Texas, I attended a WW II event [in 1998] and met the Nimitz Museum (National Museum of the Pacific War) group and the rest is history.

The 1998 group consisted of 12-15 plus volunteers who provided their own uniform, equipment and guns. We did four shows a day to a small bleacher crowd. Today, the museum provides everything for the WW II impression group of over a hundred and an $8 million battlefield with equipment, weapons, meals, sleeping quarters, sound system, and ammo thanks to General Hagee’s vision and support. Plus an amphitheater of over 400 seats.

The BAR [Browning Automatic Rifle] is a heavy automatic weapon and difficult to control (blanks no problem) It will wear you out after a full day performance. Up to 600 rounds per minute. The WW II serviceman carried the 20 plus pound BAR plus an extra 17 pounds of ammo with his normal equipment load and he probably was 5’7” at 140 pounds. I let the BAR go because we created the full complement of the Assault Team.

What prompted you switching from the BAR to the Assault Shotgun?

Likewise, after research we created the Engineer Combat Assault Team to highlight the flamethrower and Demo-man. They needed someone who could profoundly project this team to an audience. And show the true Marine Corps Manual image of the full team’s mission. The shotgun man was an integral part of this team. Age and mobility were also issues. Keep the battlefield young and fast just like it was in WW II.
Tell us about the Assault Shotgun.

Just like any 12-gauge pump shotgun (bird hunting) however, the noise is loud and the shoulder kick can be stressful. [It fires] as fast as you can pump six rounds. Be careful with a fast pump. It may jam.

How did you create your character?

My character is a combo of all the outstanding instructors I had in the USMC, both officers and enlisted. We will tell you how to do it, when to do it, and where to do it. When a soldier does something extraordinary on the battlefield, he will always say it’s a reaction of training. Not something I thought about. The audience has to be absorbed and pulled into the program. They have to feel like they are on the battlefield. This is not a formation, social event, town meeting, or church service. This is life and death issue in reality. The audience is the new trainees.

What’s the most satisfying aspect of being in the show?

The spectators come up after the battle and say: Awesome, great fire and maneuver, this is the real deal, tears in the eyes of women, my grandfather did this and never told me, all young kids should see this, I’m glad I didn’t go shopping, the casualties tell it all, and much more...Lastly the feeling of camaraderie is back just like active duty and the Old Corps. This time no one dies.