Uncle Sam Got Me 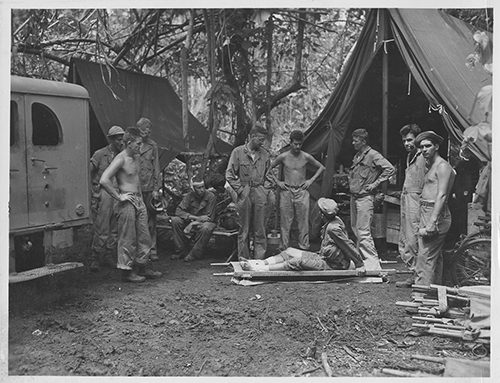 “Uncle Sam got me” is how Alan Pilot explained his entrance into World War II during his August 10, 2010 Oral History interview with the National Museum of the Pacific War.

A self-proclaimed “child of the Depression,” Pilot was born in Baltimore, Maryland in 1923. “Most of us were poor…Sometimes we had to combine living and get a couple families together in order to make ends meet. Unfortunately, my dad had a cerebral hemorrhage in 1929 when he was 38 years old, which incapacitated him for about five years during the Depression years. It was tough on my mom, who was a Rock of Gibraltar. She was a great lady, a tough lady. She was involved with raising her kids, but we never suffered; we never were hungry. Most of all, we were happy.”

Pilot graduated high school in 1941 then entered Drexel University. Fortunately, Uncle Sam called him before he could fail out. “I graduated from a county school, which did not prepare me for the type of study for being an engineer. It took me one semester to realize that. I would have flunked out if Uncle Sam hadn’t gotten me.” Uncle Sam inducted Pilot at Fort Meade, Maryland then sent him to Angel, Texas for training. “That’s when I went into the 86th Division. The Classification Officer there says, ‘You’re going to the medical tent.’ I said, ‘I don’t want to be a medic; I want to be a Rifleman.’ He said, ‘Well, I appreciate your spirit, young man, but you’re going to medical detachment.’

Pilot got his three-month training at Camp Howze near Gainesville, Texas. “We took basic anatomy; we took pharmacopeia, learning the different drugs. Our job being a combat medic, which means I would be attached to a Rifle Company once we were in combat, was three things: if you were in pain you’d administer morphine; you would stop the bleeding; you would treat them for shock. Then get them back to the Aid Station as soon as you can. That was basic. We had how to stop bleeding, where the pressure points were, how to apply tourniquets, but we also got a pretty good education on the medical end of it. But basic first aid is what we did on the battlefield, in other words, to get the guy back to the Aid Station, which was usually about two or 300 yards behind the lines. That’s basically what you did as a medic.”

Where Pilot would eventually use these skills remained an everchanging mystery. “We did our basic training and we thought we were headed for Europe then, because they knew that D-Day was coming. But instead, they pulled a bunch of guys out and we had to retrain again. Then we went to California for soft landings on the beach, beachhead landings. We trained with the Marines down in Pendleton for the invasion of the Philippines. That was our official mission. Of course, in December came the Bulge…and we then were put on orders to go to Europe.”

Pilot entered the European theater the “last of February, the 1st of March” and fought into Cologne, France to relieve the 8th Division. “We crossed Remagen but it had already been taken a few weeks before. And they put us into the Ruhr Pocket. It was about 100,000 Germans, elite troops surrounding, and they didn’t want to surrender. So one of our jobs was to go into the Ruhr Pocket. That’s where we got our casualties pretty bad, because there were a bunch of late troops…outfits that were pretty determined to hold out. So we had to convince them otherwise.”

The conditions Pilot and other members of the 86th Division faced were understandably grave and unlike anything they had encountered back home in the States. “My first experience was, we were relieving the 8th Division and it was pitch dark. We would usually get in during the night. We were running boards, I forgot where, and I tripped over something and I lost my helmet. I groped around and put my hand on a dead German’s face and I screamed. Sergeant-Somebody said, ‘Doc, knock it off!’ This is my very first experience running towards where we were going to stay, and tripping over this dead German and not realizing, and then trying to find my helmet – That was my very first experience.”

Despite this and other horrors experienced and witnessed on the battlefield, Pilot occasionally got to laugh. “During the night, we were trying to get across, and we were running towards the bridge. We got onto the little bridge and there was machine gun fire from the Germans coming in, and a big guy in front of me, one of my buddies, he said, ‘Oh, God, I’ve been hit!’ I grabbed him and said ‘Keep going, Matt. Keep going if you can.’ And we got over there and he lay down. What had happened was a piece of shrapnel hit his canteen and he felt this water coming down. He thought it was blood. (laughter) So we kidded him about that after that, saying, ‘Where’s my canteen?’ Even in the toughest times there’s always humor. That was kind of funny.”

Pilot’s time in the Army came to an end in January 1946. He returned home, started a family, earned a degree in Economics from the University of Maryland, and, like most who served didn’t talk about his experiences in the war until much later in life. He began sharing his stories of the war when in his late 70’s then with the museum at age 86. When asked during that interview if he would have entered the service had he not been drafted, Pilot explained, “I would have gone in the service; I would have joined, particularly after I flunked out of school. I would have joined the service, yes; because the attitude back then was, ‘This is just the thing to do.’”