Those Who Served: From The Cavalry To Eating Grasshopper Guacamole And Back 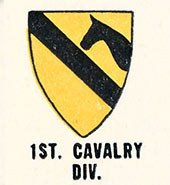 Like many men his age in 1940, Cesar Forezan, Jr. knew the US becoming involved in war was imminent. “I graduated from Bowie High School in El Paso, Texas...class of 19...class of January of 1940 and I knew that the war was coming on and I asked my father if I should wait to be inducted or enlist and he recommended enlist...[He said] ‘You may get a better assignment if you do that,’ so I did that. And so I went to Fort Bliss with a friend of mine, Kenneth Kessky and we both applied for entrance into the Army.”

Forezan was assigned to C Troop of the 1st Cavalry Division and his introduction to that unit came when a soldier dumped him out of cot and onto the ground at the break of dawn on his first day. Despite this forceful beginning and his realization that he would only be bringing home $17.50 per month, Forezan knew he was in the right place. “I chose the Cavalry because I liked horses and I just thought maybe that was what I wanted to be...besides I wanted to stay in El Paso...I didn’t want to go to the cold country of Montana.”

Forezan did well at Fort Bliss, Texas. A little too well by his account as he was soon recommended by the First Sergeant to be the Commanding Officer’s orderly. Despite the fact that the position would earn Forezan an additional $5 a month, he unwisely turned the position down. He said, “Sir, I did not join the man’s Army to be anybody’s Orderly, but if the Commander will give...order me to be his Orderly, I will be the best Orderly the Commander ever had.” The Commanding Officer didn’t take this well and Forezan was quickly sent to the Cavalry Replacement Training Center at Fort Riley, Kansas. “I went on every single duty that could be had...the latrine duty; stables duty; guard; garbage duty; kitchen K.P.; the whole works! And that...that was my introduction out to a little better knowledge of the Army.”

Forezan made the most of his situation and eventually rose to the rank of Corporal. Soon after he was sent to Fort Riley for Officers Candidate School. Forezan was called out of class a month later. “About a month before I was to graduate the Commander called me in and he told me that he...that they could not offer me a commission because I had an accent.” Forezan was visibly bothered by the comment and the Commander offered an ultimatum. The Commander said, “This lieutenant here…if he tells us at the end of his training that you have lost accent, you will get a commission provided you pass all the exams.”

Forezan lost his accent through diligence and with the help of his friends and became a Second Lieutenant on March 26, 1942. He was then assigned to the 9th Calvary at Fort Riley. The next few years of Army life saw Forezan serve as a squadron paymaster, an airborne photographer, and participate in an operation that saw him and many other Calvary men ride horseback from Rio Grande City to Alpine, Texas.

Forezan later severed under General Douglass MacArthur in the Pacific. It was during this time that Forezan ate some of the strangest guacamole he’d ever experienced. In a restaurant in the Philippines, “I noticed something that looks like Guacamole to me. And I asked the lady, she says, ‘Go right ahead.’ So I took a piece of sliced bread, I smeared some on the slice of bread and I liked it. And I...it tasted good. I said, ‘Oh guacamole is really nice.’ Well the next thing that happened she said, ‘What do you mean guacamole, I don’t understand?’ A little light went on in my brain; I said, ‘Oh, oh what did I eat?’ So I asked...she asked me, ‘What do you mean guacamole?’ I said, ‘Well, isn’t that guacamole?’ She said, ‘No, its ground grasshoppers.’ And I...I almost threw up, but I didn’t really. My...my driver, Filipino driver was just sitting over there just laughing because he knew what I was going through.”

Forezan returned to civilian life after the war but even at the time of his interview at the National Museum of the Pacific War in Fredericksburg, Texas on March 12, 2006, he had only fond memories of his time in the military. “I enjoyed the Army; I still help as much as I can and I can say with all honesty that I was turned 180 degrees around from my youth to what I am now.”

Click HERE to Listen to his Oral History recording