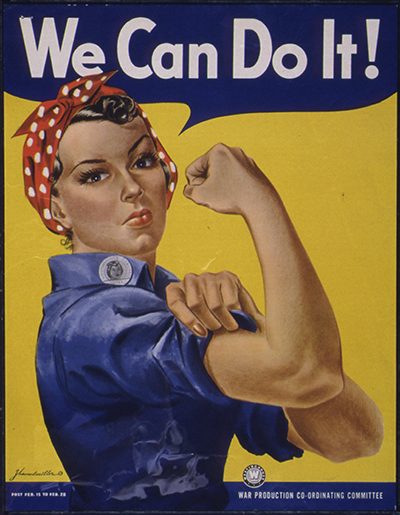 Did you know that Rosie the Riveter wasn’t famous during World War II?

In fact, the iconic poster featuring Rosie with her bicep flexed beneath the promise of, “We Can Do It!” was only on display in a limited location and only for two weeks.

The story of Rosie begins in in 1942, when a photographer snapped a shot of 20-year-old Naomi Parker working in a machine shop at the Naval Air Station in Alameda, California. Parker was bent over an industrial machine while dressed a jumpsuit, with her hair tied back in a polka-dot bandana. In 1943, artist J. Howard Miller created the now famous poster featuring a woman dressed in similar attire for Westinghouse Electric Corporation to display in its factories. The poster, and the 40 plus more in the series that followed, was designed to encourage women to join the wartime labor force. The poster of Rosie hung on the wall for two weeks at which time it was replaced by the next in the series.

The poster was forgotten until the 1980’s when it was licensed by the National Archives in an attempt to raise money in response to serious budget cuts. The poster became immediately and immensely popular and the woman in the poster was retroactively identified as “Rosie the Riveter.”

About the same time a woman named Geraldine Hoff Doyle saw the historic picture re-printed in a current magazine. Doyle identified the lady in the photo as her younger self and said that the picture was taken when she worked as a metal presser in a factory in 1942. Doyle later stated that she must have been the model for the now famous poster. The media ran with the story and Doyle was widely regarded as the real Rosie with even her obituary in 2010 stating as much.

Scholar James J. Kimball wasn’t sure of the story was accurate. After years of research Kimball found a copy of the 1942 photograph at the Naval Air Station in Alameda. The original caption glued to the back of the photograph read, “Pretty Naomi Parker is as easy to look at as overtime pay on the week’s check. And she’s a good example of an old contention that glamor is what goes into the clothes, and not the clothes. Pre-war fashion frills are only a discord in war-time clothing for women. Naomi wears heavy shoes, black suit, and a turban to keep her hair out of harm’s way (we mean the machine, you dope).”

But Kimball wasn’t the only person to have discovered the truth. While he was researching who the real Rosie was, the real Rosie was desperately trying to prove to the world that she was the subject of the famous poster.

Parker came upon the realization that she was Rosie in 2011, while at a reunion of female war workers when she saw the original picture of her on display labeled with the caption that the subject was Geraldine Hoff Doyle. Parker began trying to correct the error and her being left out of history by sharing her story with anyone that would listen. Parker was finally recognized as the original Rosie in 2016 when Kimball published “Rosie’s Secret Identity” in the journal Rhetoric & Public Affairs.

The story of Rosie’s true identity spread like wildfire after Kimble’s article and soon the media and the nation were referring to Parker as the real Rosie.

Parker died on January 20, 2018. Her obituaries identified her as a waitress, homemaker, and "the real Rosie the Riveter."