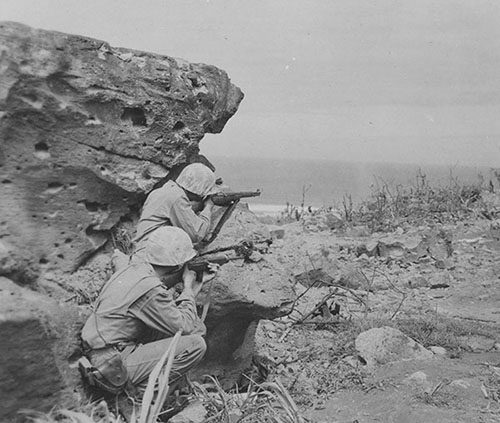 The recollections of Iwo Jima Gilberto Mendez shared with the Nimitz Education and Research Center in Fredericksburg, Texas on August 26, 2011 were truly horrifying, but also punctuated with humor and a desire to understand the actions of the country he fought for.

I didn’t sleep because of the stink of the blown-up bodies. Bodies torn to pieces. We were pinned down, my company, my platoon, was pinned down…every time somebody got up or exposed himself, he was gone… it was thirty-six days of pure hell.

Mendez was born to Sebastian and Maria Mendez on August 25, 1924 in Floresville, Texas. One of 17 children, Gilberto Mendez attended school in San Antonio until his family was forced to move to Mexico. “My parents were repatriated, and I have never been able to comprehend how you can expatriate an American citizen…We were repatriated to Mexico and we were not citizens of Mexico. We are of Mexican heritage but not Mexican citizens…This is the land of my birth. The government should never have sent us back to Mexico.”

The Mendez family relocated to the Mexican state of Michoacán. Gilberto eventually moved in with an uncle to attend school in Monterey. It was while he was there that Mexico declared war against Germany. The government implemented a draft but Mendez was not one of those called into service. “My uncle which I was living with, he said ‘You don’t have to go because you are a United States citizen. It’s up to you.’ I said, ‘Well, everybody that was born in 1924 is volunteering to go. I think I’ll go.’ Because they made it known that it would only be for a year.”

Mendez entered the army at age 17, exceled and quickly earned the rank of sergeant. He was discharged in 1942 just in time to receive word from the U.S. government that he had been drafted (Yes, the government that had once repatriated his family to Mexico now expected his allegiance and service). Mendez returned to the nation of his birth and promptly enlisted in the Marines.

Following boot camp in San Diego, Mendez was shipped to Maui where he participated in further training. He was then assigned to the Fourth Division, Twenty-third Marine, I Company and shipped to Iwo Jim.

Mendez initially felt that Iwo Jima would be easy due to the fact that his ship wasn’t immediately fired upon. “There were a lot of ships in front of us. And the Japanese held their fire…and because at first they didn’t fire, and it’s ‘Hey, this is a cake walk.’” Mendez’s attitude changed quickly however the closer his ship got to shore. “When we got closer…that’s when the fire started and all hell broke loose. You could see the Higgins boats receiving direct hits, going sky high. That’s when I got scared.”

A sense of calm and relief came over Mendez days later, when on February 23, 1945 he witnessed from the deck of his ship the now famous flag raising. But this feeling was only temporary. “My skin was like chicken skin, you know, you get excited. You lost your fear. If those guys made it, but it was false, that feeling.”

Mendez carried that feeling with him as he went ashore D plus six. “Our mission was to take the main airfield. We had a hill, Turkey Knob, and they [the Japanese] had a part of the airfield [that was] defended by a block house. We called it the Meat Grinder because it played hell on our troops.” Because of this, taking the airfield was an extremely dangerous and time-consuming endeavor. “The first five days that I was on the ground I didn’t use, I didn’t sleep. I urinated in my pants because I couldn’t, I felt that if I dropped my rifle to urinate I would be killed. I found myself talking to myself. ‘Gilbert, don’t get up,’ because they had some sharpshooters. Snipers.”

Mendez awoke the sixth day to hope in the form of a reflection. From his station behind a rock barely large enough to conceal himself he saw something shiny. He originally thought it was a mirror trying to signal him but soon realized otherwise when he heard cries of, “Banzai!”

Japanese soldiers armed with swords rushed up an unseen incline and toward Mendez and his fellow Marines. The Marines replied to the cries of, “Long live His Majesty the Emperor” with a hail of gunfire. The fighting was fierce and in the end Mendez alone was credited with killing twenty Japanese although that number was probably higher.

But the battle was far from over.

On the day following that, after that fire fight, we were ordered to move out…and all hell broke loose again.