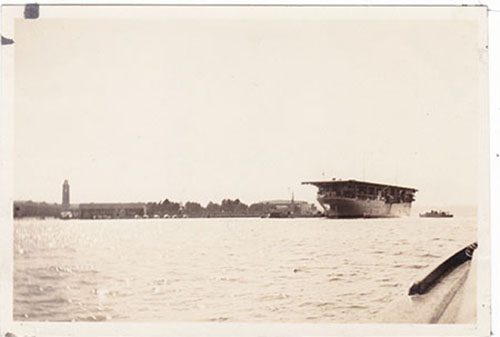 Lanson B. Ditto’s being born in New York City does not make him a Yankee, a fact that he was vocally adamant (albeit joking) when he gave an interview to the National Museum of the Pacific War on October 11, 1996. “Well, I hate to tell you this, but I was born in New York City. I have never forgiven my folks who happened to have been there. My hometown was in Paducah, Kentucky, which I have enjoyed and like to refer to as my hometown. But people like you always want to know where I was born and I have to tell in New York City. I am no Yankee.”

Despite being born far from home, Ditto spent the majority of his early life in Paducah, Kentucky. He went through the tenth grade in Paducah before transferring to Western Military Academy in Alton, Illinois to complete his high school studies. Ditto attended college soon after, “I went to college at Washington and Lee University, which is in Lexington, Virginia, and is the fifth-oldest college in the United States, and the oldest on the eastern seaboard. It is a great school. I spent two years at Washington and Lee.”

Ditto joined the Navy’s V-7 Program in 1940 and took his training aboard the USS Arkansas while sailing from New York to Guantanamo Bay, Panama, and back to New York. Ditto got out of some training – calisthenics and drills – because he volunteered to be a bugler. He was commissioned as an Ensign in February 1941 and chose to serve in the Atlantic Fleet. Ditto was assigned to the USS Langley where he took on an exciting career in laundry. “I got the ships service, laundry officer and the main deck duty, which I thoroughly enjoyed.”

Ditto enjoyed his time aboard the Langley and enjoyed his time in the Philippines. “We covered a great deal of the Philippines. We got to go to different ports and areas. We got into some remote areas. It was interesting. I really enjoyed it.” It was while he was in the Philippines that Ditto heard the news of Pearl Harbor. “I remember the night. I went ashore with the air officers onboard our ship and went to the Jai Alai Club in Manila. It had a private club on the fourth floor. I know we didn’t get back aboard until 2 AM. It just so happened that the Pearl Harbor attack took place at about 4 AM on the morning of December 8, Philippines time. The ship went to General Quarters at that time. I guess because of my participation the night before I did not even hear the call to General Quarters.”

The war came soon enough though and on the night of December 9, 1941 Ditto fought back.

“About noon on December 9, 1941 we were steaming south on open seas when a plane was sighted. This was about high noon. All ships went to General Quarters and [were] ordered to fire. We opened fire at what we thought was the altitude of the plane. We had to estimate. We set a fuse to go off at an estimated altitude. We started out at 5,000 feet and could see that it was coming up short, so we raised to about 7,500 feet and could see that it was short, too. So, we raised it up to the maximum of 10,000 feet.

Ditto's experience goes from the embarrassment of shooting a celestial body to the realities of being shipwrecked.