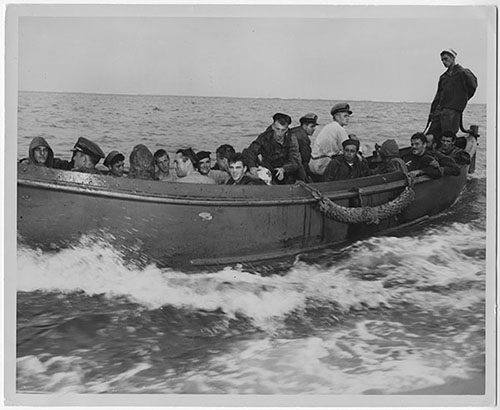 After he and the crew of the USS Langley lobbed 300 shells at the planet Venus believing it to be a Japanese plane on December 9, 194, Lanson B. Ditto traveled to the port of Balikpapan in Borneo to refuel. From there they traveled Darwin then Perth, Australia then onto Tjilapjap, Java. The USS Langley was 75 miles from Tjilapjap on February 27, 1942 when nine Japanese twin-engine planes were spotted approaching at about 15,000 feet. The crew went to General Quarters and opened fire. “My battle station was in charge of the four 3-inch/50s on the flight deck,” Ditto recalled. “We did open fire, but our guns could not reach that altitude.” The Japanese made two attempts at bombing the Langley to no avail. Their third attempt fared much differently.

“On the third run, they hit us with five direct hits, and three near-misses that opened up our hull. The ship was listing heavily, and it created some fires among the planes. We were ordered to push some of the planes over the side to reduce some of the top weight, and because some of them were so damaged, anyway. Because of flooding in the engine room, we had lost all power. We were dead in the water.”

The order to abandon ship was given and Ditto grabbed his lifejacket and jumped sixty feet into the water and swam toward the nearby USS Edsall. The Edsall steamed to Christmas Island and all survivors of the Langley transferred onto the U.S Navy tanker Pecos. But Ditto and the other survivors were only on the Pecos for a very short amount of time. “We had been on it [the Pecos] for two or three hours when we were attacked by dive-bombers from a Japanese carrier which was close by…it took them four hours of steady dive-bombing to sink the Pecos.”

This second attack means that Ditto had gone down on two ships in less than two days.

The sinking of the Pecos left Ditto and other survivors at the mercy of the ocean and the elements. Additionally, they were strafed by Japanese fighters and swimming in oil. Fortunately, help arrived sooner rather than later.

“The Whipple found us about 8:00 p.m. and started picking up survivors in the water…as far as the Langley’s original ship’s company of 428 men are concerned, only about 146 survived both sinkings.”

Ditto took shrapnel in his side and his feet badly burned during the two sinkings and although he later dismissed these injuries as not very severe, he received the Purple Heart. After being rescued from the Pecos, Ditto was shipped back to the United States for some much deserved rest and relaxation. He was then assigned to the USS O’Bannon and promoted to lieutenant (junior grade). Ditto’s time on the O’Bannon saw him go through the Panama Canal, spend time in Bora-Bora and New Caledonia, and participate in the Battle of Guadalcanal. Ditto ended his time in the military serving on the school ship O’Toole helping to train officers.

Despite his perilous time in the Navy, Ditto had nothing but found memories of his service. “I thoroughly enjoyed the almost six years that I spent in the Navy. I was associated with exceptional men on each ship, and was fortunate in being under great commanders on each of the ships I was on. I think it is a tough career in many ways, particularly in making a marriage, a home, and a life’s work, and I give a great deal of credit to those that choose to do so.”