Honoring the Pacific, Eight Incendiary Seconds at a Time 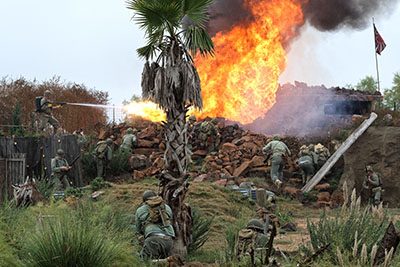 Not many historians can fire up a crowd like Kyle Perz can.

This because the Army Reserve Sergeant and San Antonio ER nurse regularly demonstrates an actual WW II flamethrower during reenactments in the Pacific Combat Zone at the National Museum of the Pacific War.I spoke with Sgt. Perez about his duties as a reenactor and what it’s like to wield such a weapon as the M2 flamethrower.

How did you come to the Museum to be a reenactor and what “part” did you first play?

My interest in our country's part in the Pacific War was fostered by my grandfathers. One fought on Guadalcanal with the Army and the other from the Battle of Philippine Sea to victory aboard an aircraft carrier. I serve to honor them. I was a combat medic during the "surge" in Iraq. I was placed originally as a corpsman in the show.

When did you first get to fire up the flamethrower?

I was selected to be trained up by the previous flamethrower operator halfway through the 2017 season, then ended up filling in the rest of the year at shows and events.

Tell us about the flamethrower.

We use a lightly modified M2 flamethrower during our show. Designed by the US Army chemical warfare service, this model was used throughout the Pacific by the Army and Marine Corps. Fully loaded it weighed approximately 68 pounds. The two 2-gallon fuel tanks could be filled with gasoline, diesel, or aviation fuel. If you add the thickener to any of those fuels you can create a substance called napalm. Napalm sticks better, burns hotter and was easier to direct/channel with the nozzle. The fluid is propelled by compressed gas; either air or nitrogen at 1000 PSI. Given this weapon’s application, its maximum direct firing range is approximately 20 meters but you can reach out and burn stuff up to 40 meters. This weapon fires at a rate of half a gallon of second giving you approximately eight seconds of trigger time before you have to go and recharge your tanks. The fire burns between 1,500 and 2,200 degrees Fahrenheit, inflicting casualties directly through burning or indirectly through asphyxiation. If I use the weapon without gloves it will usually blister my hands and can blister my face. The heat from the discharge can be felt well over a hundred meters away. This weapon was used by the US military from World War until the end of the Vietnam War, from what I understand it's since been outlawed by the Geneva Convention.

What was it like the first time you pulled the trigger?

This is the only weapon we have out there that doesn't fire blanks. It's a horrifying device. There was a substantial amount of trepidation the first few times I used it. It's exhilarating though. It's like nothing I was ever trained for in the military. I have an immense amount of respect for that weapon, the men who carried it and the men who faced it.