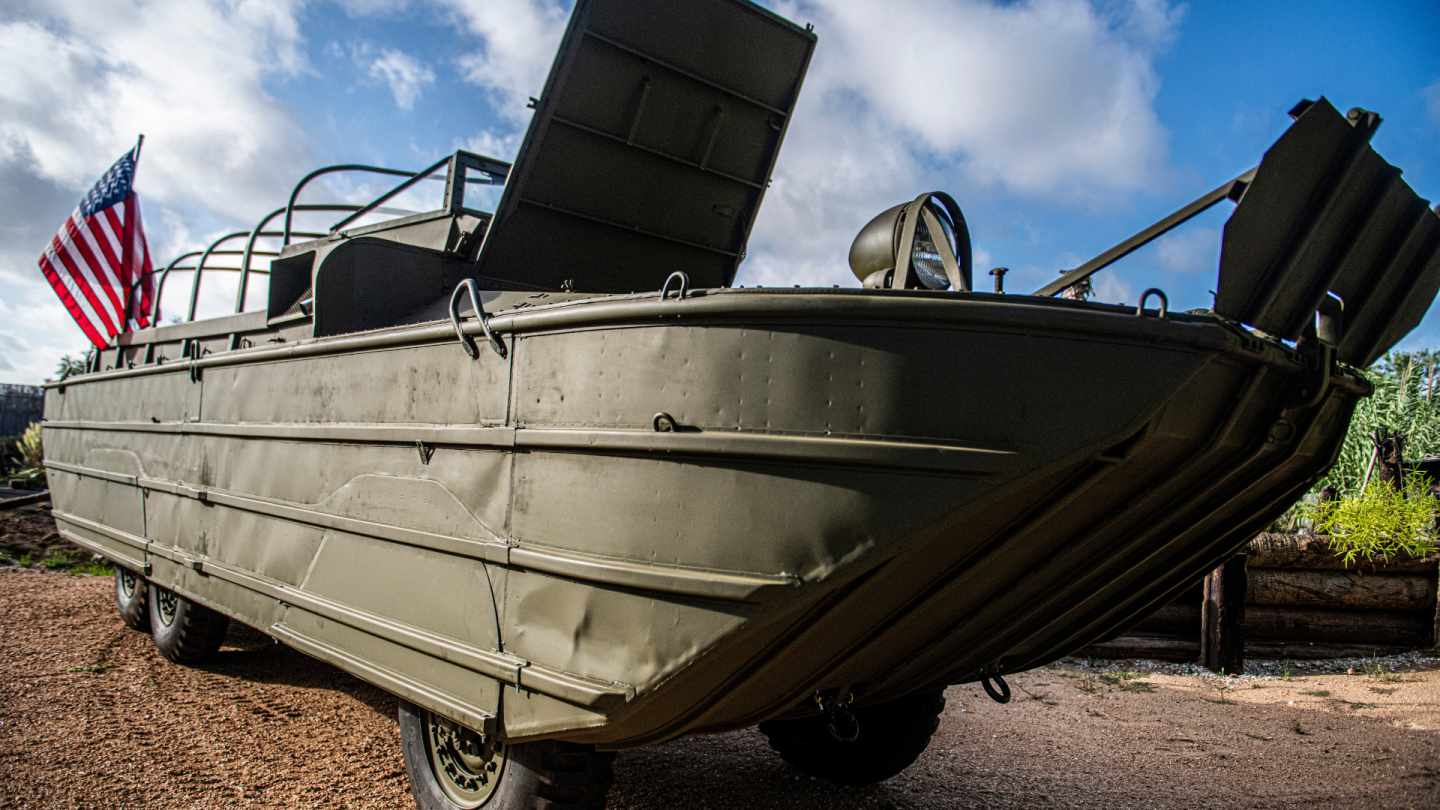 One of the unique macro artifacts that we have in our collection is a land and water capable vehicle known as the DUKW or by its nickname “Duck.” DUKW is a manufacturer’s code: D- Designed in 1942, U- Utility, K- All- Wheel Drive, W- Dual-tandem rear axles. The DUKW was originally created to solve the problem of re-supplying units during amphibious campaigns. Although initially rejected by the Armed Services, the Army moved the project forward in 1943, understanding the need for such a specialized vehicle. The Office of Scientific Research and Development created it in just 38 days! The vehicle was built and produced by Yellow Truck and Coach Coat at the Pontiac West Assembly Plant and Chevrolet Division of General Motors Corp in 1943. By war’s end, The St. Louis Truck Assembly Plant produced 21,147 DUKWs.

The National Museum of the Pacific War has had a DUCW in its vehicle inventory for many years and which was in need of restoration. In 2017, the family of Robert L. Cook wanted to fund the renovation. Since this is essentially a boat on wheels, there were many unique challenges with this project. The parts are not readily available in auto parts stores, not to mention how rare it is to find spare parts for a 75-year old amphibious vehicle! The next decision would be who could tackle such a feat of restoration?

After researching WWII vehicle restoration facilities in seven different states, all fingers pointed to Mr. John Sprouse with Sprouse’s Auto Repair & Service Inc. John is the Ground Chief of the Wings Over Dallas Air Show and Detachment Leader for the CAF Ground Forces Detachment in Gainesville, Texas. Restoration began in April of 2017. Sprouse admitted that it was one of his more rewarding projects despite the many challenges.

“To do anything, it was 6 feet up, 2 feet over, and four feet down,” he reflected. “The fact that it was saved to be used in educational programs and to honor the vets that gave their all in the use of this craft to supply the seemingly endless need during the Pacific and European conflict, certainly puts into perspective the value of such an artifact.”

The DUKW was delivered in the military-issued olive drab paint, but it will soon be painted in the tri-color camouflage used during the Iwo Jima campaign in order to represent and honor the 476th transportation battalion. The 476th was an all African-American unit that served with distinction during this crucial battle.

Jeff Copsetta, Living History Coordinator at the National Museum of the Pacific War this article is from the 3rd Quarter Nimitz News Dispatch, 2020

From Guinea Pig to WASP: The Oral History of Eleanor McLernon “Mickey” Brown

Of War and Love: The Joint Oral History of Raymond and Florence Bowers